In Kyenjojo district, a primary 5 girl was impregnated by a son to a well-known community member. The girl’s father complained to the father whose son was responsible but did not take it seriously. “You are telling me how my son impregnated your daughter and you think it’s a big deal?” I thought you were telling me that my son has stolen from someone in the community which to me is a big issue,” he added.  You should be grateful he has even helped your daughter”, Said the boy’s father. The girl’s father reported the matter to the police about what had happened to his daughter. The police did not respond to the man’s call but instead asked for fuel to facilitate them to go and arrest the perpetrator. This left the girl’s father hopeless and helpless.

A week later, I received a call from one of the community members who told me about what had transpired.  Touched by what had happened, I could not wait for the next day. After consultations to confirm on the issue, which was true, I called the Resident District Commissioner (RDC) to explain why there was no action taken regarding a case reported at one of the police stations in Kyenjojo.  The RDC apologised and immediately reached out to the District Police Commander (DPC) of Kyenjojo who later followed up the case. The next day, I got a report that the perpetrator was arrested put in jail and is currently serving his sentence.

That should serve as a lesson for people not to play around with people’s daughters because they have a future too.  Amazingly, the police could not help the victim’s parent, yet had it been that an opposition leader was staging a rally, they would have had fuel to go and disperse the crowds. The police should work for all people in this country to ensure safety and security of the locals is taken care of.

Do you know Uganda’s statistics on violence against children in schools? Well – according to a survey by Ministry of [...] 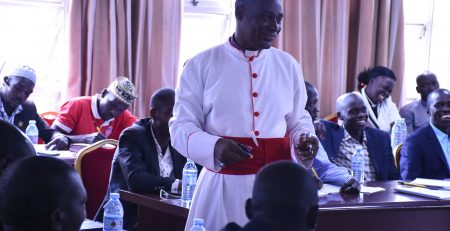 Gender based violence (GBV) and HIV/AIDS continue to be major national scourges. The prevalence of sexual violence in institutions [...]

The LOP in parliament Winnie Kiiza & other opposition leaders after a consultation meeting with the COPs & TEFU [...]