The visit which covered the districts of Kabalore, Kamwenge, Ntoroko, Bundibugyo and Kasese also aimed at identifying emerging issues and gaps in the peace process which would form the basis for remobilizing religious leaders into a strong lobby group for their continued pursuit of a joint action for peace and reconciliation within the sub-region.

According to Kitakule, peace is still fragile in the region with many challenges affecting and compounding the peace process in the region including. Some of the challenges include: Lack of support to over 4,500 orphans, vulnerable children, widows and widowers, sharp increase in inter-family conflicts, the unresolved issue of ex-Rwenzururu veterans, lack of implementation of earlier recommendations by various commissions including the unresolved land question and lastly the growing conflict between the Obudingiya Bwa Bamba and district officials.

The quest for independent dioceses of both the Anglican and Catholics in Bundibugyo region is also deepening the ongoing conflict.

“The glaring manifestation of “revenge attitude” and the unforgiving spirit in communities call for urgent attention to address the underlying causes of this protracted conflict,” Kitakule said.

He however applauded the religious leaders in the sub region who are still engaged with the peace process. Together with the government, they had formed the Joint Leaders Peace Forum of Kasese that includes regional security bodies, the office of the Resident District Commissioner, area Members of Parliament, Non-Government Organizations, civil society organizations and the Kingdom officials.

“Whereas religious leaders in the region continue to engage effortlessly in the peace process, there is need for pastoral accompaniment and capacity building to strengthen their prophetic voice and equip them with advocacy and team building skills.” Kitakule said.

Besides the security situation within Kasese and the sub-region, security agencies have continued to pursue joint efforts to restore peace.  The police have recovered all the 19 guns grabbed during the November 2016 attack, and over 200 royal guards who went into hiding for fear of arrest after the attack on the Omusinga’s palace, have returned and are being integrated into their communities.

From the meetings held with senior religious leaders and other key stakeholders in the region, it was suggested that peace and reconciliation rallies in the region spear headed by a committee of nine headed by His Grace the Most Rev. Henry Luke Orombi, Archbishop Emeritus of the Church of Uganda be organized. A high level advocacy and capacity building meeting of senior religious leaders in the sub region to reflect on a joint strategy and action to sustainably address the ongoing conflict in the region was also proposed.

However at the top of the list was the desire for a select team of religious leaders from Kasese region, together with the Council of Presidents visiting and praying with the Omusinga who is currently under house arrest at his Muyenga palace. This was immediately organized on7th April. Unfortunately, when the religious leaders arrived at the palace, they were blocked on ground that they had not sought permission from the Divisional Police Commissioner (DPC) of Muyenga. The gesture however cannot be ignored.

On this note, Kitakule encouraged the religious leaders not to give up on their role and mandate. “We should remember that we are the conscience of the nation. We should stand and be counted as people who stood for justice, peace and reconciliation in this country.” He said.

Preamble Gender-based violence is a big concern to faith institutions because it affects families, communities and the nation. The family [...] 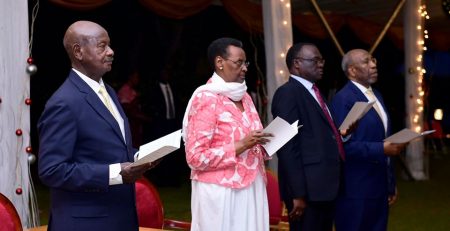 On 13th December 2019, the Inter-Religious Council of Uganda (IRCU) organised National Thanksgiving Prayers that were hosted at State [...]