Religious leaders urged to lead the promotion of peaceful elections

Religious leaders urged to lead the promotion of peaceful elections

The Inter-Religious Council of Uganda (IRCU) has urged all religious leaders of Faith Based Organizations (FBOs), to be at the forefront in the promotion of peaceful elections before, during and after 2016.

Addressing IRCU senior religious leaders in Mbarara during the launch of the Western Uganda Peace and Stability Forum, the IRCU Secretary General, Mr. Joshua Kitakule, said it is important for religious leaders to push for peaceful elections because they mark the transition of a country and have the ability to lead to violence.

“Faith Based Organizations are called to be peace-makers both in the Bible and Quran. Humanity is but a single brotherhood; so make peace with the brethren,” Mr. Kitakule said.

“It is vital we know the intricacies of Elections in Africa. In Africa, elections are polarizing, costly, considered route to wealth, and the winner takes it all; making them a matter of life and death for the political players. Appreciating these will help clarify the task at hand,” Mr. Kitakule told the religious leaders.

IRCU presents a memorandum on oil to parliament On the 8 of May 2012, the Inter-Religious Council of Uganda (IRCU) [...]

US Ambassador holds talks with IRCU Council of Presidents

His Excellency Scott DeLisi, (center) in consultation with His Eminence Metropolitan Jonah Lwanga, Archbishop of the Uganda Orthodox Church [...] 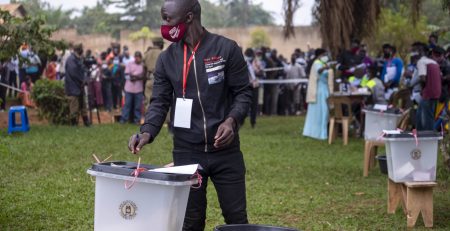 Message to the Nation on the Eve of the General Election